BUtterfield 8 is a 1960 Metrocolor drama film directed by Daniel Mann, starring Elizabeth Taylor and Laurence Harvey. Taylor, then 28 years old, won an Academy Award for her performance. The film was based on a 1935 novel written by John O'Hara in the wake of the success of his critically acclaimed Appointment in Samarra. The unconventional title of the novel and film (capitalized "B" and "U") derives from the pattern of old telephone exchange names in the United States and Canada. Until the early 1970s telephone exchanges were commonly referred to by name instead of by number. BUtterfield 8 was an exchange that provided service to ritzy precincts of Manhattan's Upper East Side. Dialing the letters "BU" equates to 28 on the lettered telephone dial, so "BUtterfield 8" would equate to 288 as the first three digits of a seven-digit phone number. 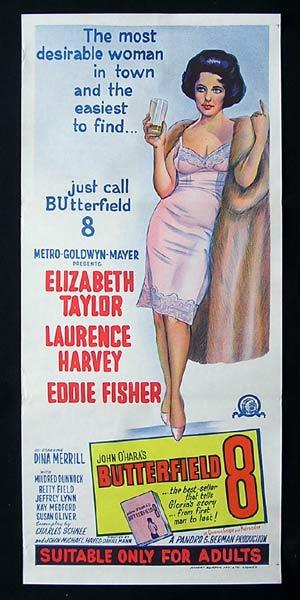 Firstly, these are two entirely different posters. The poster on the left was printed by Robert Burton Printers and the poster on the right by A & C Printers. Let's take the A & C printed daybill first. To the best of my knowledge, A & C printed MGM daybills between approx 1960 and 1962 so it is likely that this is an original daybill.

This poster was clearly used in New Zealand but it should be noted that the censor stamp was added later in New Zealand and not part of the original printing. Generally New Zealand used original Australian, US and British posters in their original form and they added their own censorship to the posters after they had arrived in New Zealand. This often led to mutilation of posters with areas blacked out and NZ details roughly stamped in place or stickers added or both. You can see more about this in my guide about NZ censor details.

The vast majority of daybills were printed in Australia. On some occasions, Australian posters were printed without the Australian censor details, generally with exactly the same art as the original release, but used in the "territories". The NZ distributors would then add a stamp or a sticker. Note that the second poster, printed by Robert Burton, has SUITABLE ONLY FOR ADULTS printed in the lower portion.

The poster printed by A and C printers does not have these Australian censor details but has a blue box in the lower section which, to me, indicates that this poster had the Australian details blocked out. I believe that the original daybill used in Australia was exactly the same but had the Australian censor details intact instead of the blue box (more about that later). Some have said that the A and C printers poster "lacks a plate" with little detail in Elizabeth Taylor's  negligee but I don't think this is the case. Remember, these are two different posters.

Although similar, there are clear differences eg the mink coat, etc etc. In my opinion, this poster was printed as intended but is simply one of the poorer examples of Australian movie posters. In any case, the A & C printed poster appears to be original. Now, to the second daybill printed by Robert Burton. When I first came across one of these I had no reason to doubt that it was not original but I received several emails from a well known and respected collector who suggested that the poster was, in fact, a 1960s reissue.

A daybill for Cat On a Hot Tin Roof was also released, apparently, at the same time with similar art and colouring. The collector emailed me photos of what he described as the original daybills for these titles. The BUtterfield 8 daybill was the same as the A and C printed poster that Bruce has currently on auction but had the words SUITABLE FOR ADULTS ONLY instead of the blue box. The second daybill is printed by Robert Burton who started printing movie posters in the late 50s so that does not really help. Daybills are generally undated so no clue there. The only definitive proof might be a pressbook but I haven't seen any for this title. I have seen similar daybills that were reissued around this time in full colour.

One that comes to mind is North By Northwest, although there is even some doubt/dispute about this. I can give you my opinions on this as well if anyone is interested. Over the years, I tended to take the word of the collector who suggested that the second poster was a 1966 reissue although there is no absolute proof positive that this is the case. I have always sold the second poster as a reissue but I think it is better described as an early 1960s re release rather than a 1966 release. I wonder if anyone out there has any definitive information, or any opinion at all, on this?