THE TRUTH ABOUT AUTOGRAPHS

Before I get into the nitty gritty of autograph collecting and dealing I want to give you some background on why anyone should listen to my opinion. For many years, I was a wholesaler of genuine "in person" autographs to a number of large retail outlets. I sold thousands of autographs in this way ranging from Cary Grant to Brad Pitt. My sources have been very reliable and all of the material I sold was fully authenitcated. I did not sell any "autographs" that had been obtained through the mail. Because I was a wholesaler, I did not attract or look for publicity. I had a steady market and I was content with that. The following comments will not be popular with many autograph dealers but they represent the real story that is rarely expressed in the industry. I think it is important that the dark side of the business is exposed. It is unfortunate that the questionable practices of many dealers damages the crediblity of the hobby and the honest dealers.

Autographs obtained through the mail

The reason I do not sell autographs that have been obtained through the mail is that I believe a huge percentage of those that are sold as genuine are clearly secretarial. There are a number of dealers who have teams of workers who send letters to hundreds of celebrities. They use a number of different PO Boxes and bascially pose as genuine collectors. They receive a great many responses – ranging from signed index cards to signed photos and then sell these as genuine autographs. Now, you really dont need to be a brain surgeon to work out that celebrities receive a huge number of requests for their signature. The more famous the celebrity the more requests. I spoke to Chris O'Donnell recently and he told me that he had no way of keeping up with the demand.

Think of the mail Tom Cruise would receive. Can you really imagine that these celebrities sign everything that is asked of them? You would have to be incredibly naiive to think that that is the case. It is more likely that many of the responses are secretarial or autopen or printed signatures – basically signed by someone other than the star in a manner that looks genuine.

So how can you determine if they are genuine or not?

Of course it is true that some stars genuinely sign some material through the mail. The problem is that if you did not see the star sign the item there is no way you can be 100% certain that the signature is genuine. Staff of various celebrities become extremely skilled at signing autographs. This is where the dealers come in. Many dealers are quite happy to provide a Certificate of Authenticity for an "autograph" that has been obtained through the mail. They argue that they have years of experience in authentication and that they can tell a genuine autograph from a secretarial version. Thats how they make money. The fact is that in most cases it is impossible to be certain that an autograph is genuine unless it was obtained "in person". It is, however, very easy to provide a C of A and pass a questionable signature off as genuine. The truth is that any dealer who obtains signatures through the mail should NEVER provide a C of A.

There are a number of publications where dealers can advertise and where the hobby of autograph collecting is discussed. Articles providing information on addresses of celebrites and events where celebrities have signed appear. There are tasteless exposes on the best signers and the worst signers as if celebrities have a contractural obligation to sign anything that is placed in front of them especially when a large percentage of autograph hunters are dealers posing as fans. Over the years these publications have listed advertisements from hundreds of dealers advertising autographs ranging from Lincoln to John Wayne to the Beatles. Anything is available for those who have the money. The problem again is that many of the autographs that are offerred by dealers in these magazines are fakes. How can I be so sure of this? You need look no further than the FBI investigation of a company which sold thousands of fake "autographs" many of which were advertised in the prominent autograph magazines. I became concerned when they were offering as many John Wayne autographs as you wanted for less than the going price. I contacted one of the magazines with my concerns and they never responded, running ads for at least a year after my first letter raising concerns. The amount of people who were ripped off by this unscrupulous company must be huge but I believe that the magazines which ran the ads also carried a responsibility and that their crediblity has been scarred.

There is always a need for a hobby to have a forum or a club where collectors can compare notes and find others who have similar interests. The problem is that many dealers use these clubs as a form of Approval. They list their memberships of vaious clubs in their advertising as if that means something. The fact is that membership of these organisations does not mean that the dealer is reputable, honest or trustworthy. It simply means that they are a member of a club where membership is available to anyone who is prepared to pay the joining fee.

I read recently that a prominent autograph dealer was giving courses in authentication. It is a fact that your signature will change and evolve with time. There are times when a signature is little more than a scrawl and times when it is discernably different to other occasions. It is simply impossible to determine absolutely positively that an item is genuine or not unless you saw the act of signing. Unfortunately many dealers who did not see the item signed "in person" are happy provide a certificate proclaiming a "lifetime guarantee of authenticity" when they should be saying something along the lines of "in my opinion the signature appears to be genuine". Of course they know that the less certain they appear in the certificate the less autographs they sell. They also know that it is hard to challenge any opinion.

There are a number of auction houses that regularly have autographs sales. Many of the items auctioned are vintage pieces where the star or celebrity has been dead for many years. These auctions do not provide certificates but rather use the coded phrase "some secretarial or printed facsimile" to describe lots. This is a form of disclaimer, where they are not being specific. It is, however, a more honest approach and generally the autographs have been obtained from fairly reliable sources – they have some "provenance" that gives them crediblity. Of course many dealers purchase these autographs and then resell them with Certificates that proclaim a "lifetime guarantee of authenticity". These certificates are little more than educated guesses.

There are some honest dealers

There are some reputable dealers who obtain their autographs in person through hard work. They attend major events where stars and celebrities are likely to be and are honest in selling their wares. Unfortunately, these dealers are few and far between. The majority of dealers sell autographs that have not been obtained "in person". They buy large collections, they buy at auctions though the mail, etc etc. No matter how good their intentions are the larger and more diverse their stock, the more likely it is that there will be fakes or non genuine material sold. In many cases they make honest mistakes but the problem lies with their Ceritificates. If they are not 100% certain they should make that clear.

So what should you do?

If you are buying an autograph from any dealer there is a good chance that it will not be genuine. That is the sad reality. You are taking a gamble and if you cant be sure about the authenticity then what is the point of buying? I would love to have a self portait/charicature signature of Alfred Hitchcock. Up until recently these items were extremely hard to obtain. Since the introduction of eBay, they have suddenly become available on a regular basis eg… 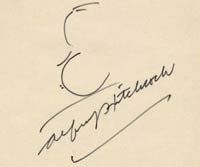 It is likely that many are fakes (including these two) and I am certainly not prepared to risk my hard earned cash on something that is unlikely to be genuine. There is too much greed in the hobby where the lure of the dollar has become irresistable to many and the Certificate of Authenticity has become an easy umbrellla to hide under. The old axiom always applies – "Buyer Beware"

If you have any comments on my opinions….

I will be listing autographs from my personal collection over the coming weeks. The majority of the autographs that I list have been obtained "in person" with many obtained on international flights. I had a unique opportunity in a previous life to meet a great many celebrities and movie stars and I was able to collect a faily eclectic collection of autographs. Many were signed on menus or menu pages because these were the best available materials at the time.

The autographs I sell are authentic. They may not be signed on glossy photos but you can be confident you are getting the real thing.
For a number of years I was consultant/supplier to Warner Brothers MovieWorld and supplied them with a range of movie memorabilia including autographs. During my time as a dealer in autographs I came across a huge range of material and also developed a great deal of knowledge on the industry. I became increasingly disillusioned with the many dishonest dealers and obvious fakes that were being sold. I turned my back on the autograph business about 5 years ago to concentrate on original movie posters but I will continue to offer a small selection of autographs from my personal collection.