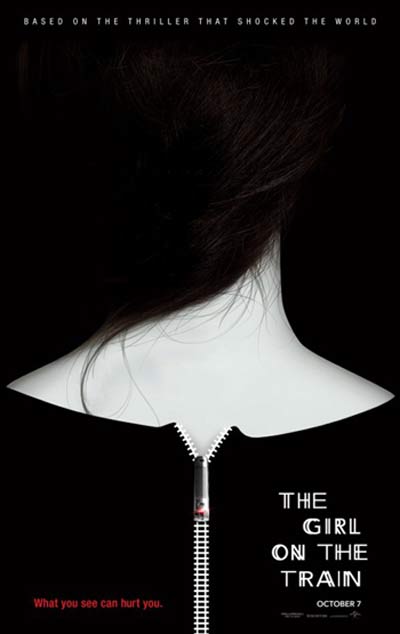 When a successful bestseller like Girl on the Train inspires a movie, there will always the question of whether the script should accurately follow the novel or whether subtle or even major plot changes can be made.
There have been many films where the movie has differed greatly from the book. One modern example is with the two recent Jack Reacher films. Tom Cruise is so different in appearance to the character in Lee Child's books that many fans cannot accept him as Reacher and some readers inevitably resent the characterisation.
When Hitchcock made The 39 Steps, he cleverly changed some key events in the book without affecting the mood of the story. In fact, many of the most famous scenes in the movie never actually appeared in John Buchan's novel. Flash forward to the more recent filming of Gillian Flynn's bestseller Gone Girl and the director closely followed the book with very little deviation. The result was a highly succesful movie.
The downside of the movie closely following the novel is always going to be that there will be no surprises to anyone who has read the book. A Crime Thriller usually relies on suspence and drama to keep the viewer guessing until the end but if you had read Girl on the Train, there will be no surprises at all.
Conversly, I wondered how someone who had not read the book would pick up on many of the nuances and subtleties that were part of the plot. From the audience reaction, it does appear that reading the book first is not a prerequiisite to enjoying the film. Perhaps those who had not read the book might appreciate the suspence and uncertainty of what is about to happen more.
Although I did read GIrl on the Train before seeing the movie, I thoroughly enjoyed seeing the plot recreated on the screen despite knowing what was about to happen in every scene. In some ways, readers prefer it to be that way. If they love the book, it will be hard to accept change.
Emily Blunt gives a credible and compelling performance as the disturbed Rachel and Girl On the Train is ultimately a fine tribute to Paul Hawkins' novel.