Movie Poster Collecting has grown immeasurably since the introduction of the Internet. There are now huge numbers of passionate collectors who seek out posters for their collections but many years ago collectors were few and far between. There was rarely any real value associated with posters. There were just a small number of people who appreciated the artwork and the memories of the films that they loved.

Ron Wakenshaw was one of Australia's earliest movie poster collectors and he sadly passed away last weekend.

Ron had a lifelong passion for the movies and a very special place in his heart for the "Brazilian Bombshell" Carmen Miranda. He told me once "My mother took me to see the movie 'That Night in Rio' when I was very young and I was absolutely captivated by the music, costumes and particularly Carmen Miranda. From that moment on I knew that my life would revolve around the Cinema".

Ron managed the Schonell Cinema and Theatre in Brisbane in the 1970s. He was able to reinvent the Schonell into a successful business with a daily programmed mix of genre and art-house cinema showing films otherwise unavailable in Brisbane. The cinema was very popular with the student population.

He instigated annual awards to Brisbane cinemas called the Ronnie’s. The Ronnies included Best Seating, Best Screen Ratio of the Auditorium, Best Sound and overall Best Cinema. It was probably not surprising that the Schonell cleaned up at the Ronnies in the first five years from its opening.

Ron had developed contacts throughout the industry including the major distributors and he kept many posters, lobby cards, press cuttings and books associated with the movies. Vic Forsythe worked for the distributors for many years and had access to movie posters from the 30s to the 80s. He saved multiples of US one sheets, Australian Daybills, lobby cards and any ephemera associated with advertising and he gave Ron many posters for his collection.

Many of the early collectors were not concerned with value or even condition of the posters. Some were even known to trim the borders off because they just wanted the images. In his later years, Ron became aware that the posters he had were quite valuable and he made contact with various collectors when he needed some money for various projects around his house and on more than one occasion, surgery for ongoing medical conditions. 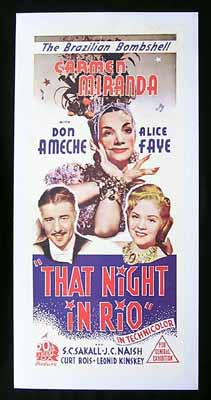 He tried to offer his posters to those he thought would appreciate them most, splitting them up into separate collections of Richardson Studio, Film Noir, Long daybills, etc. When Vic Forsythe passed away, Ron was entrusted with selling Vic's collection. He hired a huge hall in Ipswich and many thousands of posters, lobby cards, pressbooks, one sheets, first edition books and much more were assembled in huge piles. Everything was sold in lots usually to those Ron thought would most appreciate them. The collection was one of the largest ever sold in one hit and the irony was that many prominent dealers had no idea it was happening.

I visited Ron a number of times at his home on the outskirts of Brisbane. It was set on the side of a cliff and resembled an idylic tree house in many ways. In his later years, Ron made it his mission to watch a few old movies every day from a particular day and date that corresponded to the present day. He displayed Newspaper adverts and sometimes posters from the films he would watch.

Ron's love of Carmen Miranda was ever present and he actually travelled to Argentina to visit her birth place and see distant relatives. He wasnt able to find an original daybill and didnt like the design of other original posters for That Night in Rio so in the 80s, he decided to design a daybill himself. He engaged M.A.P.S printers to print a fairly small quantity of daybills with a prominent image of the Brazilian Bombshell and he gave out posters to friends, acquantainces and family. Some of the daybills have been variously referred to as original or reissues but they are in reality tribute daybills printed specifically for Ron's enjoyment.

Ron was as passionate a movie buff as you would find and also somewhat eccentric. He had strong views on life and the world and told me once "You should never rely on others to dictate your purpose in life". He was happy watching movies on his own and completely immersing himself in the cinema and its history. He told me that he believed Carmen  Miranda's spirit was present in his property and he had a memorial stone placed in his garden. His cat was named "Carmen" and that probably says it all.