HE'S MY GIRL – Rare and Collectable – Day Bill Movie Poster $99.99 (This is a promoted listing) Item number 271359889123
HE'S MY GIRL – Rare and Collectable – Day Bill Movie Poster $99.99 (The same promoted listing appears twice at the top of the page) Item number 271359889123
DAYBILL MOVIE POSTER – ORIGINAL – HE'S MY GIRL – T.K. Carter, David Hallyday $6.95 Item number 273565376889
HE'S MY GIRL Original Daybill Movie poster T.K.CARTER David Hallyday Misha McK $5.99 Item number 372620697735
The promoted listing appears at the top of the page and elsewhere in promoted areas but the cheaper priced items which are pretty much identical or in better condition are lowered in searches. It the promoted listing sells, ebay makes a higher commission and the seller wont mind because the price is inflated anyway.
If you are using a mobile phone, listings that are not promoted will be even harder to find. There are plenty of similar examples. You would think that eBay would be promoting the lower priced items
Note that completed listings are removed from ebay after a short period of time unlike other major auctions where the listings remain so that customers can go back and check prices, etc. 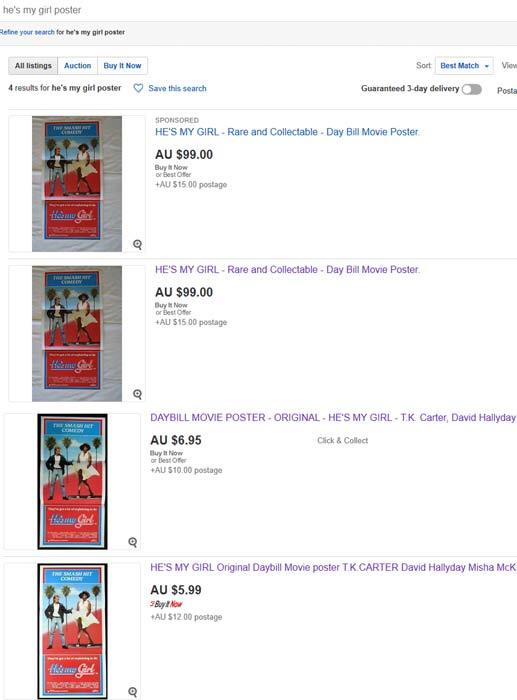