Australian Movie Posters have always had a charm and naïve quality that is unique to our country but it is unfortunate that information about the Australian movie poster artists has always been scarce. The vast majority of original posters dating from the early 1920s to the late 1960s were hand drawn lithos. Most were unsigned and records were either not kept or have been lost over the years.

Sadly, many of the artists and employees of the printing companies have passed away leaving only anecdotal stories of how the artwork was produced. Aub Moseley worked for two of the most prominent printers of Australian Movie Posters, W.E.Smith and Robert Burton Printers. 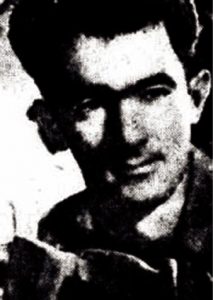 I interviewed Aub over the last couple of months and his recollections of his life as a movie poster artist are fascinating.

Aub Moseley grew up in Werris Creek in New South Wales and was always keen to see the posters that advertised prominent films of the day. He often thought that the images of some of the stars were not as accurate as they could be. He had a talent for art and won a number of prizes at Newcastle Boys High School.

He worked as a photographic artist in Newcastle and in his spare time, developed his skills painting portraits and landscapes. Four years later, he decided to try his luck in Sydney and picked up a job as a labourer at Simmons printers in Sydney.

He was eventually offered employment with W.E.Smith printers as a litho artist. Aub Moseley produced the artwork for many of the Smith printed posters from around 1948 to 1954. The studios would usually supply original artwork, photographs and press books and the artist would use those to produce the artwork for Australian posters including many of the Film Noir daybills that are now so popular.

Aub remembers working with a small group of artists including Hilda Johnston, Joe Jehan, Keith Fowler and Bert Dowman who later went on to work with Robert Burton printers.

He worked on varying formats of Australian posters from daybills to three sheets. Some of the W.E.Smith posters that feature his artwork are Gentlemen Prefer Blondes, Moulin Rouge, Singin in the Rain, City of Bad Men, Sailor of the King and he recalled working on the art for the Jungle Jim series of movies. He was asked not to sign his work and it is obviously difficult for him to remember all of the posters he worked on.

After the posters were displayed he would often go to the cinemas to see how they looked and listen to some of the favourable comments of the patrons. Occasionally, the owner of the cinema would stick a “Coming Sunday” snipe across the middle of the poster sometimes partially obscuring the faces of the stars which did not impress him. All of his hard work ruined by a misplaced sticker!

In the early 1950s he decided to travel to England. To help finance the trip he worked as a mime artist on stage with a song and dance act miming to some of the prominent musical stars of the day including Fred Astaire and Danny Kaye. This was very popular during the era and his act was a big success.

In 1954 he was able to finance the trip to England and sailed on the Otranto to work for Waterlow and Sons in London, one of the largest printers of advertising posters.

Whilst in England Aub completed an art course at the London School of Graphic Art and worked primarily on travel posters at Waterlow, many of which would be displayed in the London underground and mainline stations. He commented that the artists used up to 7 or 8 colours when producing the artwork. In Australia the artists were restricted to using as little as two or three colours and mixing them to produce different shades.

He also spent some time in Spain, working for a printing company as an artist for many Spanish movie posters of the era. He recalls producing the artwork for Annie Get Your Gun aka La Reina del Oeste movie poster.

When Aub returned to Sydney in approximately 1958 he took up employment with Robert Burton Printers as a litho artist and stayed for about two years. He was one of a number of artists who produced artwork for that company at the time. The quality of artwork on Burton posters of the late 50s was high and Aub continued to produce colourful lithos building on his experiences in London and with W.E.Smith. After he left Burton, the quality of their artwork deteriorated significantly.

In the late 50s he was asked to produce the artwork for The Bolshoi Ballet advertising posters when they came to Australia and his art was published booklets.

Although he produced the art for many of the Robert Burton posters of the late 50s he naturally finds it hard to remember the specific titles of all of his artwork. He does remember designing posters for A Passionate Summer along with A Night to Remember with Kenneth More and A Certain Smile. If you study these posters closely, the style of artwork can be seen in many other posters of the era.

Aub Moseley had kept many posters that bore his artwork including some of the travel posters he designed in England but sadly, the entire collection was stolen in the early 60s leaving him with just the memories.

In his later years, he continued to paint and produced a number of portraits and paintings which were featured in an Exhibition in Sydney.

He was thrilled to hear that his work is appreciated by collectors and to know that many of his works take pride of place on the walls of collectors around the world. Aub Moseley passed away in 2016